The study, conducted in summer 2022, measured commercial activity associated with T Dock. Information sources included the Washington Department of Fish and Wildlife, and interviews with commercial and Tribal fisheries and other maritime business users. Key study findings include:

“T Dock is the only facility of its kind on Fidalgo Island,” said Port Executive Director Dan Worra. “It supports a significant volume of commerce and a variety of uses for businesses and employers in our community. This study helps confirm the value of T Dock and reaffirms how important it is that the Port continues to achieve its mission of supporting the economic health of our community through Anacortes’ working waterfront.”

Read the full study here. The study was presented to and discussed by the Port Commission at its Sept. 1 regular meeting. Watch McKinley Research Group present study findings and hear the Commission’s discussion here.

The Port owns and operates T Dock, which was built in 1977. A recent engineering study showed that, despite consistent maintenance, the heavily used dock is nearing the end of its useful life. At 45 years old, it can now only support two-thirds of its original load capacity.

In March 2022 the Port Commission approved the replacement of T Dock. The new proposed dock will be 14,250 square feet – more than twice the square footage of the current dock – and cost approximately $7.3 million dollars. The Port is working on designing and permitting the new dock. Construction is expected to begin within two years.

The Port of Anacortes was formed in 1926 to promote economic development for Anacortes and the surrounding area. The Port district is led by a board of five elected commissioners: Bonnie Bowers, Jon Petrich, Kathy Pittis, Jon Ronngren, and Joe Verdoes. Public meetings are held the first and third Thursdays of the month at 6 p.m. in the Commission Meeting Room of the Port Transit Shed, 100 Commercial Avenue, Anacortes, WA. For more information, visit www.portofanacortes.com 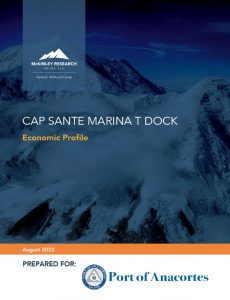