The Port of Anacortes has five commission districts, each represented by an elected Commissioner for that district. Port Commissioners are elected to four year terms. Elections are held every two years.

Commissioner Ronngren was elected Port Commissioner in 2021 and began his term in January 2022.   Mr. Ronngren currently works for the Mount Vernon School District after working many years in the Anacortes School District as a school counselor and administrator.  Mr. Ronngren has a Bachelor’s Degree in Law & Justice / Psychology from Central Washington University, a Master’s Degree in Counseling Psychology from Lewis & Clark College, and School Principal/Superintendent Certifications from Western Washington University.  An Army veteran and longtime resident of Anacortes, Commissioner Ronngren and his family appreciate many aspects that make Anacortes a special place including hiking the forest lands and boating in the San Juans on their sailboat – El Vikingo.

Commissioner Petrich was elected Port Commissioner in 2017 and began his term in January 2018. Mr. Petrich is employed as a Project Supervisor and licensed Lead Vessel Operator at National Response Corporation (NRC). He has two Bachelor’s degrees from Eastern Washington University in Finance and Economics. A lifelong resident of Skagit County, he and his family enjoy being active in many aspects of the local community.

Commissioner Verdoes was initially elected Port Commissioner in 2015 and began his term in January 2016. Mr. Verdoes was subsequently re-elected in 2019 and begins his second term in 2020. Mr. Verdoes is self-employed as a Puget Sound commercial fisherman and local businessman. He has a Bachelor’s Degree in Business Administration from the University of Washington and a Master’s Degree in Developmental Studies from Deakin University, Geelong, Australia. Mr. Verdoes was a member of the Port’s Marina Advisory Committee for seven years. Before becoming a commercial fisherman in 1994, Mr. Verdoes was employed as an Economic Development Officer for a small Australian community and operated a dairy farm in Mount Vernon.  Commissioner Verdoes resides at Similk Beach.

Commissioner Bowers was elected Port Commissioner in 2019 and began her term in January 2020. Mrs. Bowers is a graduate of Washington State University and the FBI National Academy. She retired as Police Chief in Anacortes after a 33 year career in public safety.  She has a keen interest in economic development and green industry. Mrs. Bowers is a longtime member of the Anacortes Rotary Club. She and her husband Bud, also retired from a long career in public safety, enjoy the wonderful outdoor activities provided in our community and time with their grandchildren.

Commissioner Pittis was elected Port Commissioner in 2017 and began her term in January 2018. Mrs. Pittis had a 21-year career at the Port of Anacortes, serving in various leadership roles. Commissioner Pittis is currently serving as past President of the Washington Public Ports Association Executive Committee, serves on the Northwest Career & Technical Academy General Advisory Committee and is a member of the Anacortes School District Superintendent Advisory Council. She is a home-educator and, along with her husband Russ, enjoys an active lifestyle including involvement with their children’s athletic and academic endeavors. 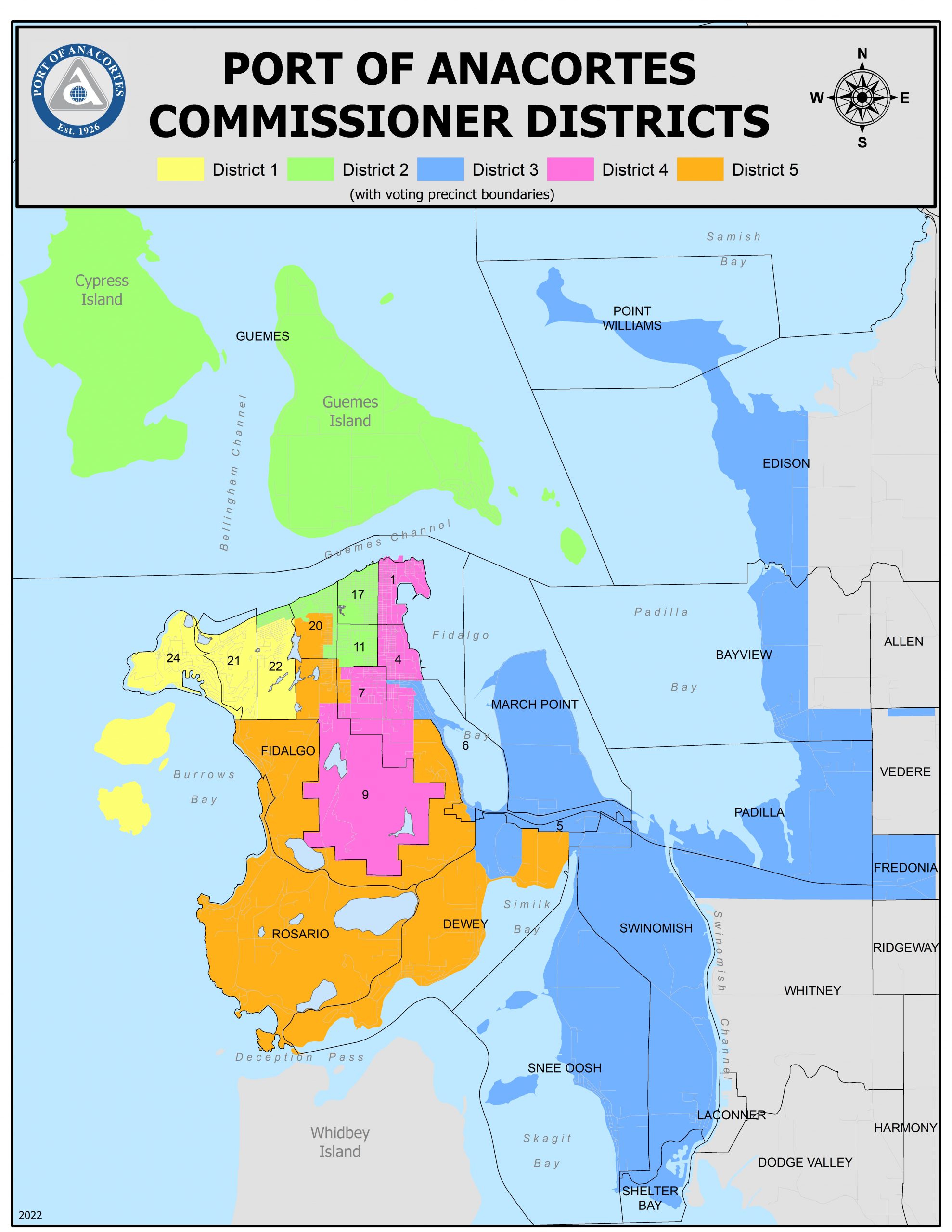 The history of Port Commissioners dates back to 1926 when the first Port of Anacortes commissioners were elected.