The SeaNotes Big Band was formed in the 1990s on Whidbey Island where it continues performing today.  The SeaNotes is a dance band with a dance instructor as well as both male and female vocalists.  The Band Director is Larry Wilhelm.  All but three members of the band are from Whidbey Island.  The group has performed in many jazz competitions, the Oak Harbor Music Festival, and various venues in the area. 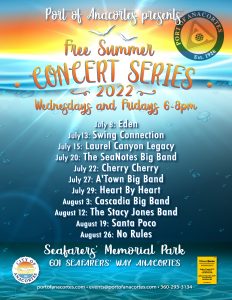